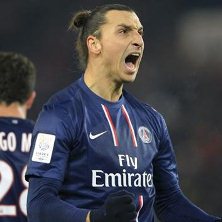 Zlatan Ibrahimovic scored a hat-trick as Paris St Germain narrowed the gap on Ligue 1 leaders Lyon to two points with an emphatic 4-0 away win at Valenciennes.

The Swede opened the scoring in the 28th minute and added two more goals early in the second half before Ezequiel Lavezzi rounded off the rout in the 82nd minute against their fifth-placed opponents.

The hosts’ form this season had promised a sterner test and they certainly started brightly with Foued Kadir testing Paris keeper Salvatore Sirigu with a shot from the edge of the box in the ninth minute.

Sirigu pulled off another fine save to deny Nicolas Isimat-Mirin four minutes later, but the visitors grabbed the lead against the run of play when Lavezzi’s initial effort was parried into the path of Ibrahimovic by home keeper Nicolas Penneteau and the Swede made no mistake from close range.