It has been reported that Valladolid striker Javi Guerra is closing in on a move to Cardiff City. 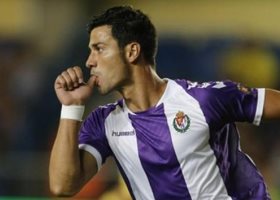 The 31-year old Spanish striker was a target for the Bluebirds last month and although they missed out on bringing him to south Wales before the deadline, he could still land at the Cardiff City Stadium.

It is believed that Guerra will soon sign a pre-contract agreement with Cardiff as he comes out of contract with the Pucela this summer.

Guerra’s agent, Pepe Mesas, suggested to Sky Sports that a shift for his client was on the cards.

“We have practically closed an agreement with a foreign club but this announcement does not rest with us,” he said.