Reports are out claiming that Manchester United boss Louis van Gaal was delighted with their victory over Real Madrid in Michigan, USA. 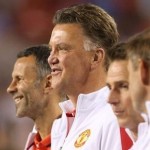 The Dutch tactician was clearly delighted to have beaten the European champions at the vast Michigan Stadium, where 109,318 fans turned up to see Ashley Young score twice and Javier Hernandez add a third goal as United booked a place in Monday’s International Champions Cup final.

“Three hundred thousand fans have watched us already and now we’re in the Miami final, it [the total] will be even more than that,” said van Gaal in his post-match press conference.

“Broadcasters all over the world should show the first goal [by Young] – it was a fantastic goal by Manchester United. I think all the team touched the ball [in the build-up]. People could have come to the stadium just for that goal, I think.”

He added: “This wasn’t a friendly – I had the feeling that Real Madrid didn’t want to lose, which is why [Cristiano] Ronaldo came on earlier than Carlo [Ancelotti] said [he would]. But we won and deserved to win.”