It has been reported that Manchester United boss Louis van Gaal expects David de Gea to report for the start of preseason. 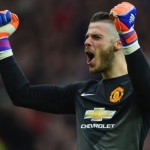 De Gea is desperate to join Real Madrid and fulfil a lifelong dream of playing for the Spanish giants.

However the Daily Star says Van Gaal has ordered De Gea to report back for pre-season training on Monday.

A club source said: “Unless a deal is struck before the start of next week, which is unlikely, then David will be back at the club for pre-season training, which is not ideal for all concerned.”

It could be an awkward situation considering Van Gaal has failed to persuade him to stay at Old Trafford.

Man Utd Drop Out Of Race To Sign Wesley Sneijder