It has been revealed that Charlie Nicholas believes Arsenal would be best suited to sign a quality centre-half this summer. 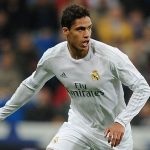 While there has been plenty of talk regarding the striker situation at the North London club, former Gunners forward Nicholas has implored Arsene Wenger to go after a player such as Real Madrid’s Raphael Varane rather than spending big money on a goalscorer like Napoli’s Gonzalo Higuain as has been rumoured.

He said on Sky Sports : “I accept over the last two months that the central striker area has been a massive problem, but there’s been a problem from day one and that’s at centre-back,”.

“There’s the soft excuse that Alexis Sanchez, Olivier Giroud, Danny Welbeck and Theo Walcott have all had their injury problems, but for me the biggest issue exists at the back.

“If I had a position to buy right now and a choice between a centre-forward and Raphael Varane, my priority would be Varane.

“If they get Gonzalo Higuain in for say £50m and keep conceding two or three goals then they still won’t win anything.”