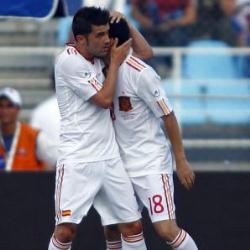 David Villa and Xabi Alonso netted long-range free kicks from near-identical positions to help Spain to a 3-0 win over Venezuela in a friendly international on Tuesday.

The world and European champions’ victory, to which Pedro contributed a 20th-minute goal, was their 39th in 44 matches under coach Vicente del Bosque, putting him one clear of his immediate predecessor Luis Aragones to set a national record.

Del Bosque said the team’s end of season tour, on which they also recorded a 4-0 victory over the United States in Boston, had been a resounding success and the squad was in great shape ahead of the next Euro 2012 qualifiers in September and October.