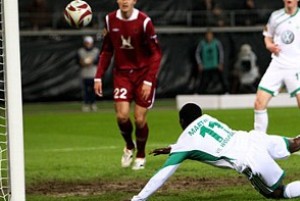 Christian Gentner scored in the 119th minute as Wolfsburg advanced to the quarter-finals of the Europa League with a home victory over 10-man Rubin Kazan in the last 16.

After a 1-1 draw in the first leg in Russia, Alan Kasaev gave Rubin the lead after 21 minutes. Obafemi Martins equalised for the German champions Wolfsburg in the 58th minute.

Rubin went a man down after 109 minutes as Cesar Navas was shown a second yellow card, and Gentner scored the match-winner a minute before the end of extra-time.