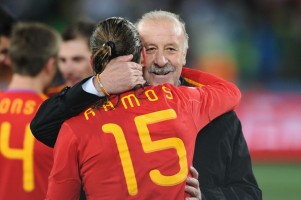 Del Bosque revealed: “The dressing room was delighted, ecstatic. It was difficult to speak on the phone because it was so loud in there.

“But Spain the country deserves this triumph, this World Cup. This goes beyond sport. We have to celebrate.

“All the people have been behind us in Spain and we’re delighted to reward them with this victory.”

Del Bosque also added that : “This World Cup title does draw from what we did in 2008. There’s continuity – this is a continuation of the players from that squad two years ago.

“We had a good legacy from those finals and we respect what happened in the past.

“Some new players have been brought in and incorporated, so we did have fresh players. But we follow the same lines.”