Arsenal centre back Per Mertesacker has won two FA Cups and the World Cup in the last 12 month but that doesn’t necessarily mean the German is any better at handling trophies. 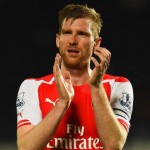 Mertesacker played a key role in Arsenal’s defence of the FA Cup in 2014/15, starting every game and scoring once, on the way to their 4-0 win over Aston Villa at Wembley last Saturday.

Despite the Gunners’ return to trophy-winning ways, the German almost broke the famous cup during Arsenal’s victory parade through north London during the week.

Check out the video below for some more behind-the-scenes action from Arsenal’s memorable day: