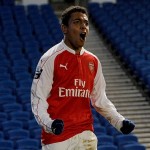 Reports are out claiming that talented Arsenal youngster Donyell Malen announced himself to the club’s U21s team with a fabulous individual goal on Tuesday night.

The 16-year-old Dutch sensation, who joined the Gunners from Ajax on the summer, marked his debut in the reserves side with a delightful finish in the 2-1 win over Brighton & Hove Albion at The Amex.

With the score at 1-1, Malen took upon himself to race past a Seagulls defender before deftly chopping over the advancing keeper, giving a glimpse of what he is capable of.