Manchester City captain Vincent Kompany was absolutely delighted to add the 2013/14 Capital One Cup to the club’s trophy cabinet on Sunday. 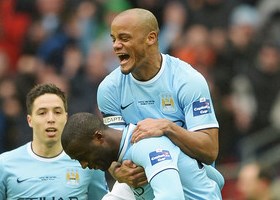 The Eastlands outfit produced a stunning second-half comeback to beat Sunderland 3-1 at Wembley in the league cup final and the skipper was over the moon.

Fabio Borini had the Black Cats ahead at half-time but strikes from Yaya Toure, Samir Nasri and substitute Jesus Navas gave City their first piece of silverware under Manuel Pellegrini which delighted Kompany.

“We came out and showed some really good stuff and the goals we scored were unbelievable. We showed quality but obviously not in the first half.”

He added: “We never take anything for granted and we will enjoy every moment.

“It’s a first (trophy). I think we should be hungry for more but it’s nothing more than that. We’ve achieved something great for the club and we need to carry on.”