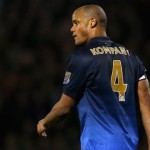 It has been reported that Manchester City captain Vincent Kompany insists form means nothing going into the derby against Manchester United.

The reigning Premier League champions are reeling after a dismal defeat at Crystal Palace.

But Kompany says ahead of their trip to Old Trafford: “A derby is a derby. It doesn’t matter what place you are in the league, it’s a derby. If anything, it’s a good moment to go into a derby.

“I guess the momentum is a little bit with our neighbours at the moment, but it’s the perfect place for us to go and try to rectify what we’ve had here.”