Voronin Unhappy With The Lack Of First Team Chances At Liverpool 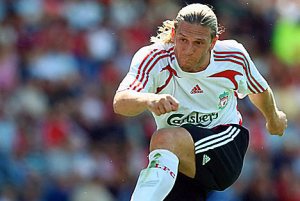 Andriy Voronin has revealed that he is unhappy about his lack of first-team chances at Liverpool but denied rumours he wants to return to Germany.

His agent Andrey Golovash told reporters that Voronin has discussed his current situation at Anfield with Rafa Benitez and the manager does not argue about his good form but his position is still the same and that Voronin must wait for his chance.

He also added that Voronin has no intention of leaving Liverpool and that he wants to play and prove he can be useful for the team.

Ukrainian international striker Voronin, now age 30, was on the bench for Sunday’s 2-0 victory over against Manchester United at Anfield.

Lack of match practice has already put his international career under threat. There are rumours in the Ukraine capital Kiev that he will not be recalled to the national squad without a regular run in the Liverpool first-team.

However German reports of a return to Hertha Berlin where Voronin was on loan last season were dismissed to be untrue.

Golovash insisted that Voronin is not interested in a move to Hertha Berlin and that the parties are not even considering that.


Rio Ferdinand To Face The Axe After Liverpool Blunder