Walcott Desperate To Get Back In Action For Arsenal 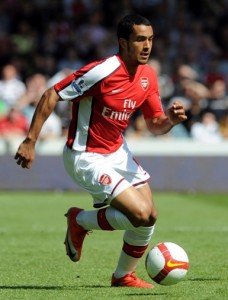 England international winger Theo Walcott is desperate to make his first appearance for Arsenal when they face Olympiakos in the Champions League on Tuesday night.

The 20-year old winger is yet to play for the Gunners this season because of a lower back problem and was on the verge of coming on against Fulham on the weekend.

Arsene Wenger admits that he is trying to be patient with Walcott but is being relastic about his lack of game time in recent months.

Wenger said that Walcott has a chance to be in the squad but not to be starting as he has played only 45 minutes since June.

Arsenal will be looking to back up their 3-2 opening group stage win over Belgian outfit Standard Liege when they face the Greek club at Emirates.