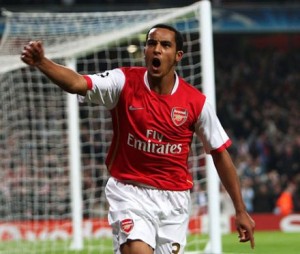 Great news for all Arsenal fans as winger Theo Walcott is set to return to action with Arsenal this weekend.

It has been widely reported that Arsenal and England international winger Walcott has not played a game this season after suffering a muscle injury in his lower back.

However it has been reported that Walcott is finally on the way back after being given an injection to boost his recovery and the England star is hoping to be in Arsenal’s squad for Saturday’s trip to Fulham.

That will give the 20-year-old hope of being available for England’s double header with Ukraine and Belarus next month to get his World Cup hopes back on track.

Owen Hargreaves Back In Training