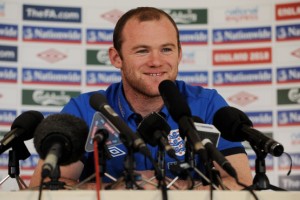 Rooney missed the 1-0 win over Wolves at Molineux after aggravating a knee injury during England’s midweek victory over Egypt.

Ferguson was not happy with his star striker for declaring himself fit for international duty, and United look set to pay the price with the absence of their £27million man for the return encounter with David Beckham and company at Old Trafford this week.

“Wayne is very doubtful for Wednesday,” said Ferguson. “The Wembley pitch has killed him.”