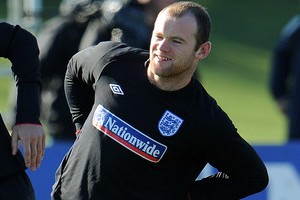 It has been reported that England manager Fabio Capello was left considering whether to risk the Manchester ­United superstar in the last international before he names his squad for South Africa.

Rooney was forced to start on the bench on Sunday for the Carling Cup final against Aston Villa, due to discomfort in his knee.

Yesterday he was apparently injured by England team-mate James Milner in a training-ground collision.

In the end, Rooney’s workout was ­restricted to 30 minutes, much of it shooting practice.