We Can Win The Premier League – Ancelotti 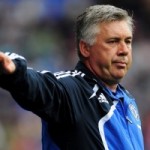 Carlo Ancelotti insists Chelsea are ready to plunder Premier League glory from under the noses of Arsenal and Manchester United after shaking off the disappointment of their European exit.

Man Utd will face Bayern Munich on Tuesday and then welcome Chelsea to Old Trafford four days later and Ancelotti is hoping to make the most of any United fatigue – either mental or physical.

“I agree with Arsene,” said Ancelotti. “Mentally, it wasn’t good for us to go out of the Champions League. But after the victory against Portsmouth, this moment is finished. We have to look at every game. We play Aston Villa and then have a week to prepare for Manchester United.

Do you think Chelsea can win it? take our poll on the right >>>


Charlie Davies Back Training with Sochaux After Horrific Accident