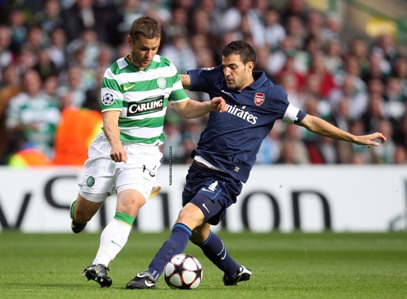 Arsenal manager Arsene Wenger has maintained that his young Gunners can cope without injured captain Cesc Fabregas against Celtic on Wednesday night and secure a place in the lucrative group stage of the Champions League.

However it is believed that Spanish international midfielder, Fabregas could return at Manchester United on Saturday, but before the Gunners will look to extend their 100% domestic start, there is the small matter of the return leg of their European tie, when Arsenal defend a 2-0 lead.

Gunners boss Arsene Wenger said ahead of the match at the Emirates that he still have the personnel who can come in and that it is another chance for Aaron Ramsey as it is a big season for him.

Wenger added that Ramsey’s target for this year is between 15 and 20 games and the way he is developing, he could get that.

Spain international Fabregas is recovering from a hamstring problem, on which scans have revealed only minor damage and puts him back in contention to return for Saturday’s Barclays Premier League showdown at Manchester United.

Czech winger Tomas Rosicky is training again following his injury lay-off, and also may be included this weekend.