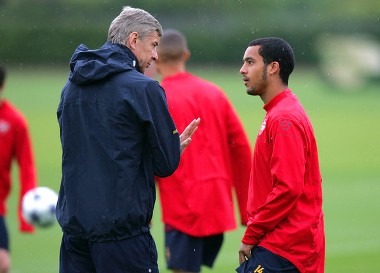 Arsenal boss Arsene Wenger has revealed that he is cautious over committing Theo Walcott to a return from injury against defending champions Manchester United next week.

England international midfielder Theo Walcott has missed the victories over Everton and Celtic with a back injury and is sidelined for this weekend’s Barclays Premier League match against Portsmouth, with Wenger’s men then facing Tony Mowbray’s side again before the United clash.

Wenger said that there is a slight concern regarding Walcott but he believes that it is a question of days and not of weeks for him. Wenger also said that it is always difficult to set a date for a return and he thought Walcott would be available for Celtic match but he wasn’t and that is why he will be cautious.