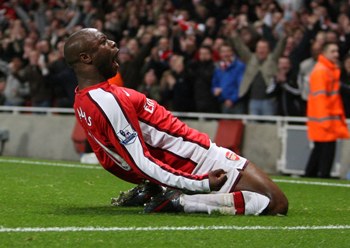 Premier League football news are out and it has been reported that Arsenal manager Arsene Wenger is ready to discuss a new contract with defender William Gallas before the end of the year.

The 32-year-old French international defender is in the final season of a four-year deal and will be free to talk to other clubs in January. The defender’s future at the Emirates Stadium looked uncertain last season after some outspoken comments about his team-mates led to him being stripped of the captaincy.

Arsene Wenger told reporters that he will assess the contract of William Gallas in December and the signs are looking good for him.

Wenger also added that Gallas and Thomas Vermaelen look comfortable together and are complementing each other very well. The manager added that it is sometimes difficult to know who makes the other one good.