Wenger To Deploy Walcott As Striker Next Season 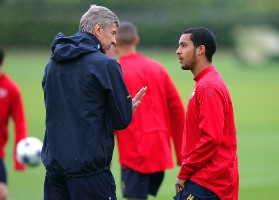 Arsenal’s talented young English winger, Theo Walcott has revealed that he could be deployed as a striker this coming English Premier League season.

Walcott revealed that Arsene Wenger said hopefully he will be able to start the young winger up front now and then. Walcott also said that playing as a striker is his natural position but also said that he would play anywhere for Wenger this Arsenal team.

Walcott added that he wants to improve his final ball and score more goals for the club. He said that striker get judged on goals so he wants to score 15-plus this season.

He also added that he love making runs in behind, and also loves scoring goals and making goals and said that this is what he will be judged on and that he is looking forward to that.