Wenger : Van Persie Should Be Back Before The End Of The Season 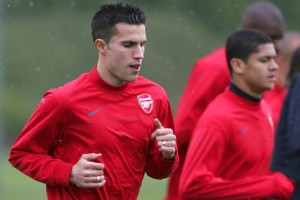 Arsenal boss Arsene Wenger is upbeat over the prospect of Robin van Persie playing before the end of the season.

The Dutch international striker has been out since suffering what turned out to be a serious ankle injury while on international duty with Holland during November.

“There is still a little chance for Robin van Persie this season,” Wenger revealed in his programme notes for the Barclays Premier League clash with West Ham.

“We are following his progress and physically he is quite sharp, but once he is ready to kick the ball again and returns from his rehabilitation, it will still take him another three weeks.

“This means that, even if he came back next week, adding another three weeks on would still take him nearly into May.”