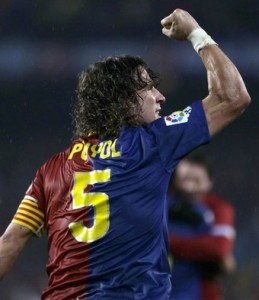 Sensational transfer news are out and it has been reported that Arsenal boss Arsene Wenger is chasing Barcelona captain Carles Puyol.

The Spanish international defender, now age 32, is baulking at signing a new contract and has been given until December to put pen to paper.

It is also believed that along with Arsenal, Manchester City are also keen to bring Puyol to England.