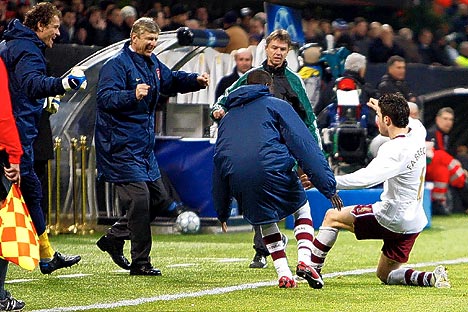 Arsenal manager Arsene Wenger has claimed that he has as much chance of signing Barcelona superstar Lionel Messi as the Catalan giants have of getting midfielder Cesc Fabregas.

Spanish and European champions Barcelona have been linked with the Gunners captain all summer but Wenger is adamant that Fabregas is going nowhere.

And the French boss mischievously claimed he tried to buy Messi and was priced out of it. Wenger told that he has made a bid for Messi and nobody speaks about it. He also said that Barcelona said that Messi is £125m. It’s the same and that there is no chance Arsenal will sell Cesc.

Wenger also said that Arsenal would never sell its players one day before the championship starts.

When Wenger was told that Fabregas has Barcelona blood in him, the Gunners manager replied: “A man is always defined by the way he is committed to his contract and that has nothing to do with the blood he has.

Wenger also said that Cesc is committed to the club and that the player has him that and also told that to the Press.

The manager also said that he cannot master the noises coming out of Spain and it is not Fabregas who encourages the idea. He also said that Arsenal is not in a weak financial position, and therefore the club does not need to sell anybody.

Wenger ended by saying that Fabregas has always been very committed to Arsenal,and that this is his sixth year and what he wants is to win trophies for this club.