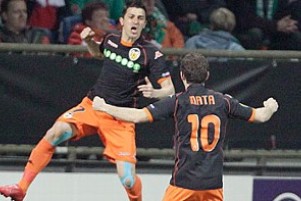 David Villa scored a hat-trick as Valencia advanced to the Europa League quarter-finals on away goals after a thrilling draw against Werder Bremen.

Valencia grabbed the lead after two minutes through Villa and Juan Manuel Mata made it 2-0 with just quarter of an hour gone.

Hugo Almeida pulled a goal back for the hosts in the 26th minute before Villa grabbed his second just before the interval.

Torsten Frings scored from the penalty spot in the 57th minute and Marko Marin made it 3-3 just five minutes later, but Villa completed his hat-trick in the 65th minute and Claudio Pizarro’s strike six minutes from time was not enough for the home side.