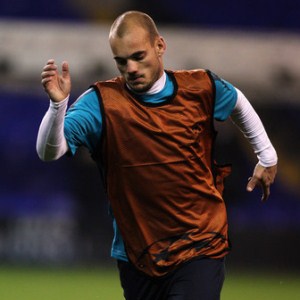 Despite his anaemia problems, Inter Milan midfielder Wesley Sneijder has revealed that he is determined to make their clash with AC Milan.

The Dutch international star told fans on his Twitter and Facebook pages that he will be ready to face Milan and revive Inter’s flagging fortunes.

“When will overcome this moment of weakness I’ll be at the best of my condition, the break of yesterday helped me to relax and reflect.

“We are in trouble, but there are alibis. We come from a fantastic season that no one fan will ever forget.

“True fans don’t whistle their players even in times of difficulty. In the derby I won’t miss because it will be like my debut, as it was last year. I’ll never forget it.

The former Real Madrid star also said that : “I’m recovering, we need your support, both us and Mr. Benitez. He’s a great coach, just as it was Mourinho.

“Jose Mourinho is the past, the derby is the top of the season. We must think about present not past. So let’s play!”


Agent : Zlatan Ibrahimovic Was Close To Joining AS Roma!