Why David Moyes can’t afford to ignore the January sales 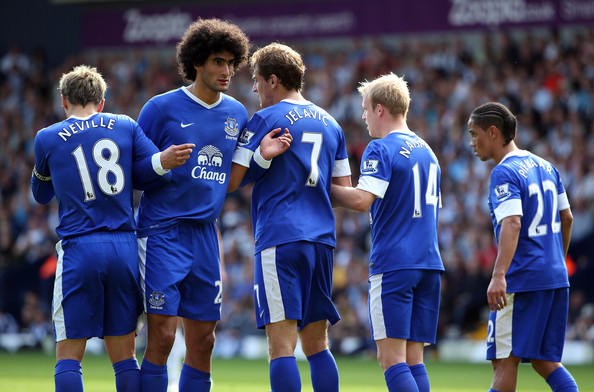 Everton are pushing hard for a top four finish this season.The Toffees are playing some good football but importantly they have been consistent with their results and  have managed to keep up with Arsenal, Chelsea and Tottenham.

However compared to their rivals they have a relatively small squad and in March they have a very difficult run of Arsenal away, Man City and Stoke at home and  Tottenham away. In years gone by Everton have fallen at the final hurdle in terms of getting a Champions League spot and that may be because they have not invested properly in the January market.

Obviously Everton don’t have the money of a Man City or a Chelsea but Moyes has a knack of making clever shrewd signings. The Blues manager may want to persuade the board to get their check book out and look at strengthening the squad with a few bargain buys.

Everton’s back four of Phil Neville, Sylvain Distin, Phil Jagielka and Leighton Baines is very strong, Baines in particular who is seen by many as the best left back in the division. Beyond that they have Tony Hibbert, Johnny Heitinga and Seamus Coleman. With Heitinga and Neville pretty versatile you could make the point that Everton are strongest at the back and sensibly may look to spend their money in other positions. Albeit an injury to Baines could be costly as they have no real replacement and therefore may look at Wigan’s reliable left back Mayor Figueroa, who is out of contract in the summer and would be decent back up.

In midfield David Moyes has a good combination of flair and hard work. Steven Pienaar,  Kevin Mirallas and Leon Osman possess that bit of quality on the ball whilst the likes of Darren Gibson and Thomas Hitzlsperger give them a bit more steel. They can call upon Phil Neville to act as a defensive midfielder and Marouane Fellaini was originally signed to protect the back four so there are options there.

However Everton have yet to replace the passing abilities which spaniard Mikel Arteta gave them. Some of the very best performances Everton have put in under Moyes were when the now Arsenal man Arteta was pulling the strings at the heart of the midfield. These players are hard to find especially on a tight budget but there are options. Yoan Gourcuff has had his injury problems and has struggled for form at Lyon but a move to England could rejuvenate the player and is said to be available at a cut price.

If Everton are looking for someone to give them that final ball in the last third then there is a man who could become a real success for them. His name is Andrei Arshavin. Yes the Russian playmaker from Arsenal has hardly featured this season but many of the Gunners faithful believe that his talents have been wasted playing on the wing. If he went to Everton and they played him in his preferred central role then they may just get the best out of him. Arsenal are keen to sell and Everton would get him in a cut price deal with his contract due to expire at the end of the season.

In attack The  Toffees have Steven Naismith, Victor Anichebe, Nikica Jelavic and Marouane Fellaini. Jelavic was superb last season but has struggled for consistency this year. Anichebe and Naismith are decent options off the bench and Fellaini is a class above the rest but is sometimes needed in midfield and on occasion, can drop too deep leaving the other striker isolated. There is speculation that Danny Welbeck may be available on loan. Moyes has a good relationship with Sir Alex Ferguson so they may be able to strike a deal. Everton would then have a top young striker on their books until the summer. If they make the top four then that Champions League money will allow them to go and buy their own star front man rather then loaning one.

All off these strikers bring something to the table but none of them are natural finishers. This is why Darren Bent must be someone on David Moyes radar. Out of favour with Paul Lambert at Aston Villa, Moyes could offer Bent a route out and with his finishing instincts , Everton could be looking at an extra five to seven goals,which may prove vital at the end of the season.