William Gallas has admitted that he is looking forward to his stint in Australia with the Perth Glory. 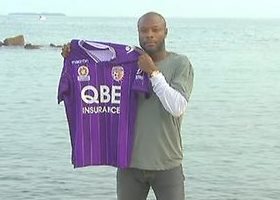 The former Arsenal, Chelsea and Tottenham centre-back will link up with the A-League club next month after recently signing a one-year deal.

The 36 year old former French international admitted it only took head coach Alistair Edwards half an hour to convince him to become a Glory player.

“I feel good, I feel very excited to be in Australia,” Gallas told Fox Sports in Cannes.

“I don’t know that country, but I spoke with some people who are from Australia and from Perth and they said I will love it.”

Gallas added: “We spoke for maybe 30 minutes and after what he said to me, I decided with my agent to go to Australia.

“For me, it was very important to have a new challenge.”

Steve Round Pleased With The Performance Of Ashley Young