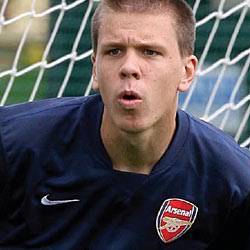 The 20-year old son of former Polish international goalkeeper Maciej Szcz?sny has been with the Gunners since August 2007, and spent last season on loan at League One side Brentford.

Szczesny, out of contract in the summer, had suggested he would look elsewhere for first-team football.

However, the 6ft 5in Pole committed his future to the Gunners.

Filippo Inzaghi Out Injured For The Rest Of The Season