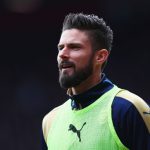 Reports are out claiming that Wolfsburg are preparing a massive offer for Arsenal’s Olivier Giroud.

Foot Mercato is suggesting that the German club will follow through with their interest in the striker and lodge a legitimate bid this summer.

It is understood that Frenchman Giroud could be let go by the Gunners at the end of the season as they seek a big-name, top quality goalscorer.

Giroud, 29, has not scored in 15 Premier League games but that has not stopped Wolfsburg from planning an offer which would land the player around £5.5million a year.

The Bundesliga outfit recently cut former Gunners forward Nicklas Bendtner and reportedly want Giroud to be their main man in place of Max Kruse, who has had off-field troubles, and Bas Dost, who has failed to fire this season.

Former Montpellier ace Giroud has scored 20 goals in all competitions for Arsenal this season but it is felt that the North London club need a more cutting edge and classy striker if they seriously want to challenge for the Premier League title.