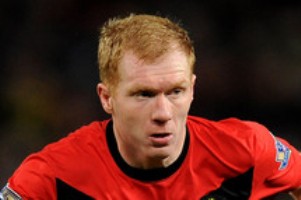 Manchester United went top of the Premier League with a hard-fought 1-0 victory over Wolves at Molineux.

Paul Scholes’s finish from nine yards was the difference between the sides after home substitute Sam Vokes missed a sitter in injury time.

The result, which sees United move two points ahead of Chelsea and Arsenal, was unfair on a Wanderers side which matched United in the first period and had other chances in the second.