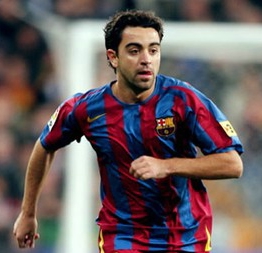 Barcelona midfielder Xavi has called on the Spanish giants to make a bid for Arsenal and Spain international midfielder Cesc Fabregas.

The Arsenal captain is believed to be good friends with Xavi, having starred alongside him at international level.

Nou Camp boss Pep Guardiola has also declared his interest in signing the midfielder during the last transfer window, only to be met by a frosty response from Gunners boss Arsene Wenger.

But with Fabregas, now age 22, having started his career in Barcelona’s youth team, Xavi believes a fresh move next summer would be welcome news.

Xavi told reporters that he would like to play with with Fabregas and that he links up with Fabregas very well whenever they play for Spain.

He also said that many people say that the both of them can’t play together. However Xavi said that it is not true as they have demonstrated it in the final of the European Championship.

Xavi went on to say that he hopes that Fabregas will join FC Barcelona as he is a football player with Barcelona DNA and that he is showing at Arsenal that he is on another level.

Xavi also said that he would love him to sign and that they could play together at Barcelona.

Xavi ended by saying that Fabregas’s career is ahead of him and thinks that iFabregas will be in Barcelona in the future.