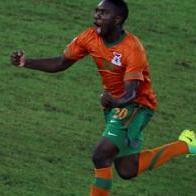 Ghana paid the penalty as Asamoah Gyan saw a spot kick saved before Zambia scored with their only attack of the second half in a surprise 1-0 win in their African Cup of Nations semi-final in a sodden Bata.

Zambia substitute Emmanuel Mayuka completed a smash-and-grab victory for the underdogs as he tucked the ball beyond Ghana keeper Adam Kwarasey from 22 yards out on 79 minutes to complete a miserable day for the 2010 World Cup quarter-finalists.

It could have been all very different for Ghana if Gyan had tucked away his penalty kick after Davis Nkausu had taken out Kwadwo Asamoah with a late challenge in the box on eight minutes.

Mweene dived to his left to complete a fine stop. Ghana huffed and puffed, but could not blow Zambia’s house down with Mayuka’s goal enough to provide Zambia’s gateway to the final on Sunday where they will bid for a first win in the African Cup of Nations final.

They were losing finalists in 1974 in Egypt and in Tunisia in 1994, but will hope to go one better in Gabon and Equatorial Guinea.