Zidane Is Not Ready For Major Role, Says Florentino Perez 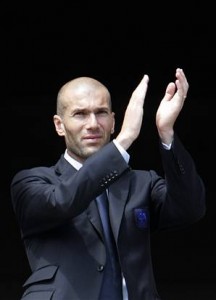 Real Madrid president Florentino Perez has said that it is too soon for legendary midfielder Zinedine Zidane to be considered for a major position at the club.

Perez added that Zidane can advise from a technical and also football standpoint but also said that this year will be a transition year for Zidane.

The president also said that Real Madrid is a huge undertaking and that it is a model that is very difficult to understand because it integrates sporting, economic and social development.

Perez added that Zinedine will have to learn all of that first.

Zidane was announced as the advisor to the President as Florentino Perez on the 1st of June 2009.

Zidane along with Jorge Valdano the General Director, and Miguel Pardeza the Sporting Director, are the key decision makers on the sporting side of Real Madrid.

Battle Commences For Nicolas Millan A.K.A “The Next Cristiano Ronaldo”