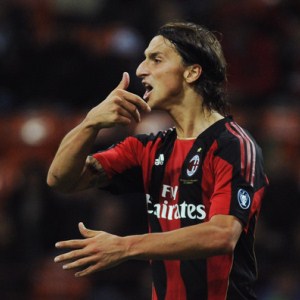 AC Milan striker Zlatan Ibrahimovic has revealed that he is ready to face his former club Inter Milan in the upcoming Milan derby.

The Swedish international striker played this fixture many times in a Nerazzurri jersey, but Sunday evening will see his derby debut for their arch-rivals.

Ibra told Sky Italia television : “In three years with Inter I won and also suffered a bit. I have fond memories, but that is the past, this is the future,”.

“Will the Nerazzurri fans jeer me? I welcome their jeers, as they fire me up even more. It just adds to the motivation.

He added : “Inter are now an opposition team for me. I play for Milan and they’re my opponents, so doing everything to beat Inter is normal.”

Ibrahimovic famously walked out on Inter in 2009 to join Barcelona, stating he wanted to win the Champions League, but saw his former teammates lift the trophy instead.

“When I was playing for Inter, there was a plan for the future, but now we can say it is definitive. The squad was nowhere near as united at the time. They won the Treble last season because they are strong, had so much potential and they gave it their all. I went to Inter in order to win and I won.

“I left Inter because I had reached the nadir and couldn’t do any more. It is better to change so you can have that new motivation and adrenaline. This is why I left. Mind you, I also joined a stronger side.”