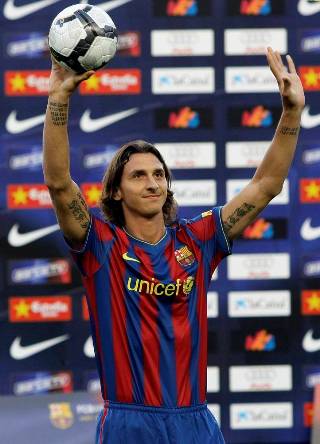 Sweden international striker Zlatan Ibrahimovic is set to make his Barcelona debut in a friendly against Manchester City after recovering from a hand fracture.

Barcelona coach Pep Guardiola said that Zlatan is in good shape and that there are plans on Ibrahimovic playing a part against the English club.

Ibrahimovic joined from Inter Milan last month in a swap deal with Samuel Eto’o but has been sidelined following surgery to the injury he sustained while on tour in the United States with the Italian champions.

Forward Lionel Messi, who had a thigh muscle strain, has also been given the all-clear to play in the Joan Gamper Trophy match, the club’s traditional pre-season curtain raiser at the Nou Camp.

The club also revealed that French pair Thierry Henry and Eric Abidal were unable to complete a full training session after they picked up minor injuries in Sunday’s Spanish Super Cup first-leg win over Athletic Bilbao.

It was also said that Spain midfielder Andres Iniesta and Mexico defender Rafael Marquez has joined the rest of the squad for the start of the session as they near the end of their recovery from injury.

However, Guardiola said he probably would not be able to count on them for the European Super Cup match against Shakhtar Donetsk in Monaco on August 28.