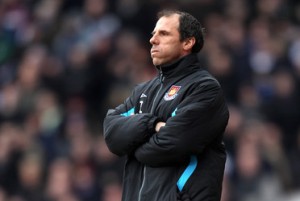 West Ham manager Gianfranco Zola is confident that his club will remain in the top flight next season.

The Hammers are three points clear of the relegation zone ahead of Tuesday night’s vital home clash with fellow strugglers Wolves but Zola believes his players will perform in a positive manner and get the job done to ease some pressure at the wrong end of the table.

The Italian released a statement in the club’s website saying that : “I am very confident and we have a lot of players coming back to fitness in the squad. I know my players are determined to do well and show their ability,”

“They know it will be a big crowd on Tuesday and will be up for the battle. It will be a challenge from the first whistle and we will be doing our best.

The former Chelsea player also said that : “Make no mistake, I am not pleased at all to see us in this position. In these moments though, we have to keep our composure.

“We need to do the right things at the right time and not get too emotional. Otherwise you cannot improve the situation.

“After the weekend, the table hasn’t changed too much which is a good thing. However, I am only thinking about my team and what we have to do.

Zola then ended by saying that : “Everything is up to us and I will take a lot of positives into Tuesday night.”