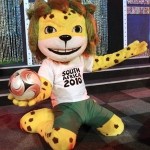 FIFA on Tuesday brushed aside lingering doubts about South Africa’s readiness for the World Cup, as cities across the nation staged dance parties and celebrations to launch the 100-day countdown.

FIFA president Sepp Blatter insisted the country was ready to host Africa’s first World Cup, which kicks off June 11, and said he was bothered by naysayers who worry South Africa won’t pull it off.

“It’s not so much that there’s pessimism, but that it’s always being thrown into doubt. It’s bad, because when there’s doubt, there’s no confidence. For me and FIFA, that bothers us sometimes,” Blatter told a news conference in Durban’s new stadium.

“There is no doubt, no doubt,” he said. “Let’s go now, let’s have this World Cup, and then we will discuss end of July.”

He spoke after a tour of South Africa’s 10 stadiums that will host the month-long tournament. Construction is complete at all the stadiums, and only two have yet to host games to try out the new facilities.

“We are on track, we are ready to make this World Cup and this is the main message following this inspection tour,” FIFA secretary general Jerome Valcke said.

Schoolchildren were invited to ditch their uniforms for football jerseys, while Johannesburg planned a street party in the Sandton business district to teach people the “diski” — a dance inspired by football moves that is the centrepiece of the country’s marketing campaign.

Durban was deploying teams to taxi ranks and train stations across the city to pass out 100-day badges, while in front of City Hall a pile of 100 footballs was set out, with one to be given away each day until June 11.

South Africa has poured 33 billion rand (3.9 billion US dollars, 3.2 billion euros) into preparations for the tournament.

In addition to the stadiums, major upgrades to airports in Johannesburg, Cape Town and Bloemfontein are complete, while Durban’s new airport is set to open on May 1.