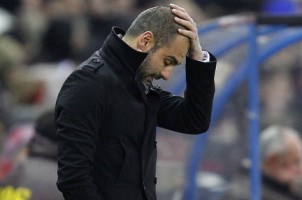 Barcelona suffered their first defeat of the season at Atletico Madrid, who did their city rivals Real a massive favour with a 2-1 victory.

Pep Guardiola’s side were decimated by injuries with Carlos Puyol their only regular defender starting the match.

Atletico attacked from the off and were rewarded inside nine minutes when Jose Antonio Reyes beat two players before sliding an inch perfect ball behind the defence for Diego Forlan. The striker made no mistake.

Simao made it 2-0 less than a quarter of an hour later as he drilled a free-kick into the net from the edge of the area. Zlatan Ibrahimovic pulled a goal back on 27 minutes, slotting home at the far post from a corner but Atletico held on to record a famous win.

Barcelona are now just two points clear of Real Madrid in second, having played the same number of games. Arsenal Monitoring Barcelona’s Sergi Samper In The US