It has been reported that Juan Mata is supremely confident that Manchester United can get the job done at Wolfsburg this week. 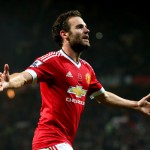 The Red Devils take on the German side at the Volkswagen Arena in the Champions League and require a win to get through to the Round of 16 of Europe’s premier club competition.

In the wake of Saturday’s disappointing 0-0 draw with West Ham Unite, Spanish midfielder Mata wrote in his weekly blog that he feels United are well-prepared to overcome Wolfsburg despite it being a tricky task.

“As you know, this Tuesday we have a really important game,” read part of the blog on juanmata8.com.

“We play in Germany against Wolfsburg and it’s likely that we’ll need to win in order to reach the next stage.

“We all know how tough it is to play against German teams at their stadiums, it’s a big challenge, but we believe that we can get our ticket to the next round of the Champions League there, and also a boost of confidence for this busy month of December.”