Reports are out claiming that Arsenal veteran Mikel Arteta is being linked with Juventus. 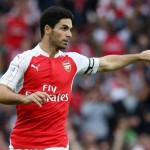 Arteta is off contract in June and yet to discuss new terms with the Gunners.

Interestingly, the Spaniard has been doing his coaching badges this season in Wales.

Wenger Reveal Arsenal On The Verge Of Re-Signing Nacho Monreal