Reports are out claiming that Arsene Wenger says his Arsenal side will need to show patience and control against Olympiakos on Wednesday night. 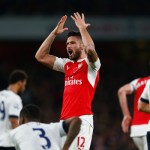 The Gunners require a two-goal win over the Greek club or need to score at least three goals and win by one goal if they are to progress to the next phase of the Champions League.

Many believe Arsenal will need to come out firing at the Karaiskakis Stadium but Wenger insists the North Londoners will be measured in their approach as they strive to make it to the Round of 16 of Europe’s elite for the 16th straight season.

“I think it is important we focus on the performance and the goals will come,” he said.

“When a goal will come, I don’t know. I just think, when we play well, we have a chance to score.

“I think what is important is that, as with basically every game in the Champions League, you attack well and defend well.

“Just go into the game with the desire to win it and knowing you have to do both sides of the game well.”