According to the Daily Mirror, Birmingham City winger Demarai Gray is looking for an exit from the club in the January transfer window. 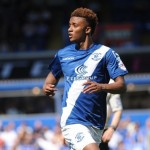 The Blues have slumped to eighth position in the Championship after just one win in their last seven league games.

The 19-year-old is disappointed with his club’s recent form, and is reportedly pondering a St Andrew’s departure, which has alerted the likes of Bournemouth and Leicester City.

According to the report, Gray has a £3.75million release clause in his contract and the Cherries and Foxes could quite possibly come calling in January.

Arsenal are also said to be monitoring the talented youngster.