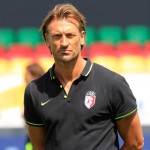 Reports are out claiming that former Lille coach Hervé Renard would love to work in England.

LOSC fired Renard earlier this season and he remains a free agent.

He told D+1: “Where I would dream to work? … In the England Championship to be very humble.

“And the club for me is Arsenal with all due respect to Arsene Wenger. It will be almost impossible to take his place.

“At Arsenal you cannot just defend or people will leave the stadium.” Jens Lehmann : FA Cup Success Can Give Arsenal Self Confidence!