Reports are out claiming that Besiktas are launching a bid for Arsenal goalkeeper David Ospina. 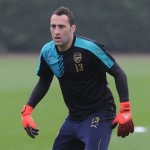 The Turkish giants intend to ferry Ospina away from London over the New Year.

Ospina is open to the move after finding himself benched in preference to Petr Cech this season by Gunners manager Arsene Wenger.

The Colombian had Besiktas fans buzzing last week when ‘liking’ some fans’ tweets urging him to make the move.

Besiktas will seek a loan deal for Ospina with the option to sign him outright in June.