It has been reported that Louis van Gaal unconvincingly states that Manchester United have improved under his tutelage following the Red Devils’ exit from the Champions League. 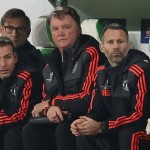 United endured an embarrassing exit from the Champions League after the 3-2 loss at the hands of Wolfsburg on Tuesday night.

Following the defeat, many have pointed their finger at manager van Gaal but the Dutchman surprisingly went on to claim that the Red Devils have improved dramatically under him despite the European exit, although he could not defend his side’s defeat.

Van Gaal said: “The circumstances were not so good for Manchester United to play this game. That’s difficult to understand because the fans and the players but also the manager want to win every game, but it’s not like that, in sport you can lose also.

“At the moment I cannot defend myself because we are out of the Champions League. Every word I say is the wrong word.

“But when you see the facts we were further in the Capital One Cup, qualified for the Champions League group, we have played all these matches, and are still in a very good position in the league. The facts say we are better than last year.

“That’s my answer because I can only give facts. But I’m disappointed that we are out of the Champions League.”