It has been reported that former PSG and Barcelona star Ronaldinho has spoken of how close he came to joining Manchester United. 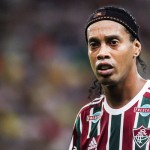 Ronaldinho was expected to move to Old Trafford in 2003 before Barcelona swooped under United’s noses and took him to the Nou Camp.

“It was a matter of 48 hours, but Sandro Rosell had told me way before I got the offer: ‘If I become Barca president, will you come?’ I said yes.

“It was a quick negotiation. I told the English I had chosen Barca. It was the right choice. Brazilians have always loved Barca.”