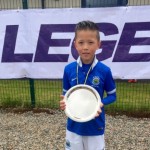 It has been reported that the father of Real Madrid trialist Mark Norris admits their priority is to sign for Manchester United.

Mark Norris, an 11-year-old central midfielder from Whitehead in County Antrim, has been granted a trial with Spanish giants, Real Madrid

Speaking to the BBC his father, Keith, revealed: “He is still only 11-years-old, he is only a kid, there are a lot of good footballers in Northern Ireland and he is so lucky.

“People can think one guy has potential and one guy hasn’t, it is up to Mark, if he wants to make it, he has to make it himself.”

Keith, an avid Manchester United fan, was asked what would happen if the Red Devils were to express an interest.

His answer: “I’m a Manchester United fan so that answers that question.”