It has been revealed that Manchester United midfielder Marouane Fellaini hopes Anthony Martial can go on a scoring run. 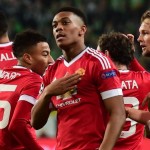 The French international striker struck in defeat at Wolfsburg, his first goal in 14 games.

“It was a very good finish and a good attack as well,” the Belgian told MUTV.

“I hope for him now that he continues to score, because December is important and a big period in the league too. There are a lot of games coming up, so I hope he scores more goals.

“We’ve got a lot of injuries, but that’s football and there’s nothing we can do about that. We’ve got a lot of players in the squad and the manager is giving players a chance, so they can show themselves. It’s good, but I hope the injured players will come back soon too.”